Pinch-hitter Projects at Bottom of the 9th is an experimental, residential art project in the Whitman section of South Philly situated just above the stadium district as the name implies.

As time passed during our shelter in place, I began to feel the need and desire to share art with the public since the ability to experience work in typical art spaces was not an option. This allowed for a creative endeavor that could bring art beyond the customary viewer, creating a democratic system for expression and interpretation.

I began installing hardware to carry flags and banners on the front of my home. I reached out to a couple textile artists whom I have personal relationship and I invited them to join in and show work.

My original plan was to “open” on Loving Day in June, however the circumstances surrounding Gorge Floyd’s murder prompted an urgency to begin earlier.
I made a banner to hang that read, “I Can’t Breathe” and in that instance Pinch-hitter Projects began.

The official opening was on Flag Day, it seemed appropriate. It also happened to be the same day that the vigilante activity to protect the Christopher Columbus statue began- which happens to be in my neighborhood. The tensions were high and someone called the police on us (the artists and a few friends who sat out front of my home.) There were a few heated discussions about the state of the nation and I considered this a positive. I seek to have open debates about our opposing views as American citizens. This, to me, is the very thing that art can do – open a dialogue.

Since that day, I have had a rotating display of banners and flags. I have 12 artists involved from California to Vermont. I don’t refuse work, I only ask that there is no profanity or police topics.

I have typical work made of fibers but, there is also wooden work and rugs that have hung. I have given priority to artists of color, trans artists and womxn, but the space is open for expression from anyone who wants to show. I am now hanging prints in my windows and will hopefully incorporate video in the near future.

Ideally, I would be able to pay for transportation and offer a small rental fee for work used. I am hoping to receive a stipend or grant in order to do so. This project has received a fair amount of attention in the past month and a half and I feel inspired by the artists who have shared their voice so generously. I have highlighted their work on my personal Instagram as well as on a Tumblr account specific to the project. The organic nature in which this has unfolded has been a wonderful experience and I hope to continue to offer this space for both creatives and viewers. 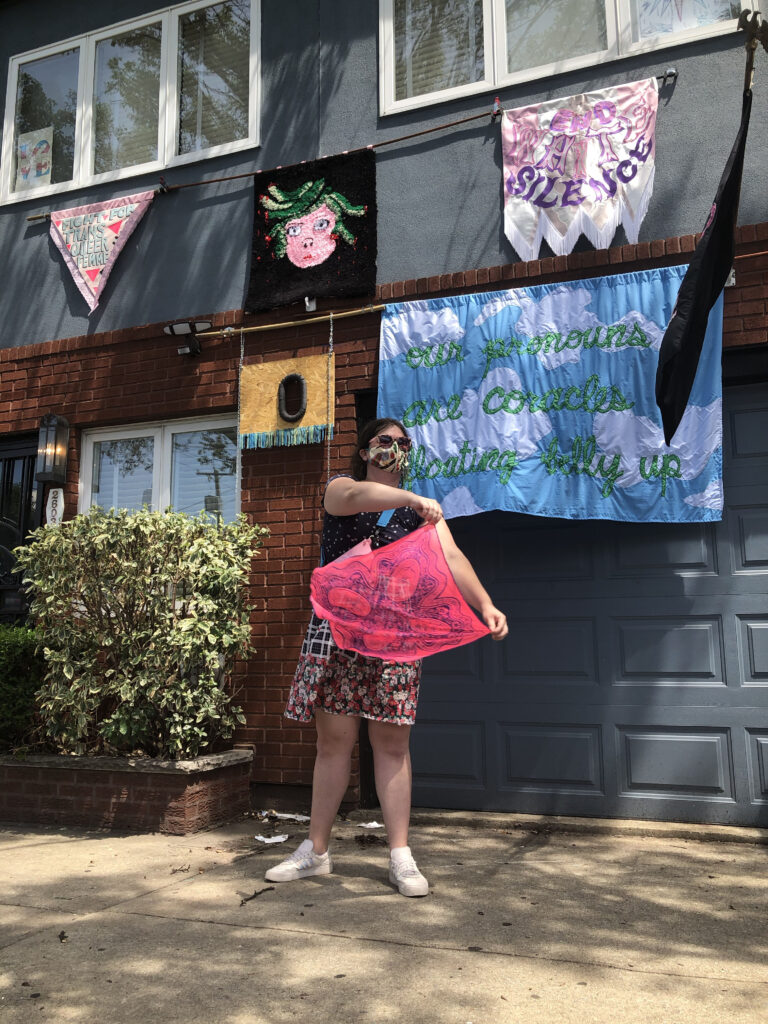